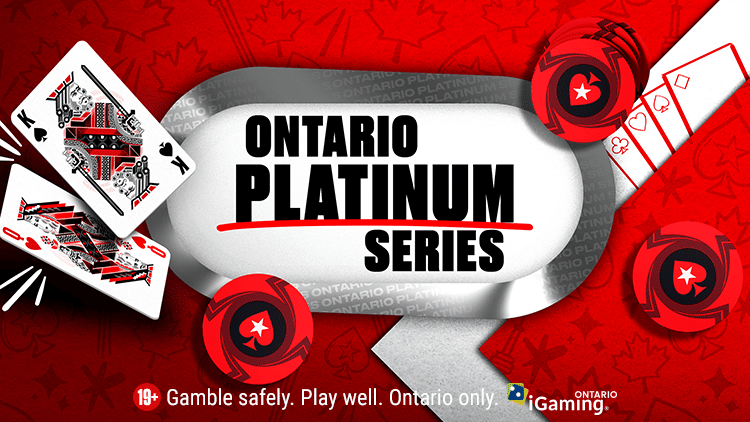 PokerStars Ontario became the newest poker operator to join the regulated Ontario online poker market when it went live in late June. Now, the operator has launched the first-ever tournament series in the province, the PokerStars Ontario Platinum Series.

The Series kicked off on July 10 with 15 separate events, eight failing to reach their guaranteed prize pools, offering a prize overlay for all participating players.

The Ontario Platinum Series is not only the first-ever PokerStars tournament series in Ontario but the first one that’s been thrown in the province to date, with the BetMGM Poker Ontario Network — BetMGM, partypoker, and bwin — and 888poker Ontario yet to provide their players with an opportunity to participate in a big tournament on their networks.

With 90 unique poker events and a chance to win a PSPC Platinum Pass worth $30,000, Ontario Platinum Series is the most exciting poker event in Canada. You can jump in by downloading the PokerStars Ontario client and signing up for a fresh player account.

The Ontario Platinum Series is a reasonably big event even by the standards of more significant and longer-standing markets. The Series features 90 events, including all types of poker games and a variety of buy-ins ranging from CAD $5 up to CAD $1000.

Low-rollers will have multiple chances to play Texas Hold 'em for just CAD $5, while mixed games aficionados will be given an opportunity to compete from CAD $20 and up.

While most of all tournaments will be played out at Texas Hold 'em tables, PokerStars is ensuring that it showcases its variety in this Series by scheduling events in other games such as PLO, PLO 8, Razz, Stud Hi/Lo, and more.

The schedule is guaranteed to have something for everyone each day of the Series, but a few events stand out. The CAD $1k buy-in Super Tuesday SE with a CAD $40k guarantee and the CAD $500 Sunday High Roller with an equal guarantee are sure to attract the attention of all the high-stakes players in Ontario.

The Main Event of the Ontario Platinum Series will feature a CAD $300 buy-in and a massive CAD $200,000 guarantee. Looking at the numbers from the early events of the Series, it may happen that those who pony up the CAD $300 end up enjoying a beautiful overlay in the biggest event held in Ontario thus far.

Those who find the CAD $300 a bit steep will have a chance to compete in the Mini Main Event with a CAD $50 buy-in and a CAD $40k guarantee on July 17, the same day that the Main Event launches.

It is also worth noting that the Progressive Knockout format, which has become extremely popular for some time now, will be heavily featured at the Series, with a good chunk of the overall schedule falling off to PKO events.

The Ontario Platinum Series will feature CAD $1,000,000 in total guarantees over its 90 events. Judging by the early data, PokerStars may end up paying plenty of that from its own pocket, as several events on opening day failed to reach their guarantees.

Win a Platinum Pass in the Ontario Platinum Series

If playing in such an attractive inaugural tournament series and the potential overlays alone were not enough, PokerStars has made sure to sweeten the pot by giving away several PSPC Platinum Passes throughout this series.

All players who enter any of the Ontario Platinum Series events will take part in the PSPC Platinum Series Prize Draw, where lucky winners will receive a variety of prizes, including one $30,000 Platinum Pass, giving them entry into the $25,000 PSPC scheduled for January 2023, along with $5,000 to cover travel and accommodation costs.

A further Platinum Pass will be awarded to the winner of the Ontario Platinum Series leaderboard, with each event of the Series awarding points towards the leaderboard.

With so much going on, PokerStars Ontario is the place to be for all MTT fans, and the operator expects growing player numbers in the coming days as the Series moves toward the Main Event on July 17.